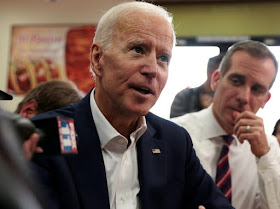 The Political Union of a Presidential Candidate Gaffe Machine Joe Biden and a Policy Gaffe Mayor Eric Garcetti.
** Blogger's Notes: As the reign of Failure Mayor 2.0 Eric Garcetti further sinks toward a 2022 demise, the former Rhodes Scholar, currently a Mayoral Officeholder with numerous Policy Gaffes, surprise no one with his safe choice Presidential Endorsement of the Poster Elder of Personal Gaffes,  "Quid Pro Joe Biden".

Its readily apparent that Mayor Garcetti's Endorsement of the "Father of LA-residing Hunter (and his past support of Governor Gavin Newson), are/were predicated on ensuring consideration for future Political Options (such as US Senate, V.P., Cabinet consideration) upon the end of his time at 200 N. Spring Street. But as evident by his recent unsuccessful efforts on behalf of Heather Repenning for LAUSD and Measure EE, Quid Pro Joe may have committed another Gaffe of Judgement, especially if Mayor Garcetti can't deliver (again) at the Ballot Box in March. 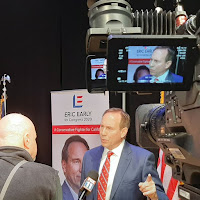 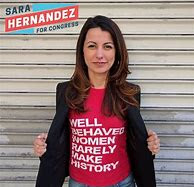 Will ex. CD-14 City Councilman Jose Huizar Staffer and former Congressional Candidate Sara Hernandez, behave well on behalf of #MeToo Enabler Kevin Alexander (of or de) Leon?
A bit of CD-14 City Council Campaign Intrigue from Downtown LA. Rumors are making the rounds that former CD-14 City Councilman Jose Huizar Downtown Staffer and failed Congressional Candidate Sara Hernandez, is using her DTLA Strong Platform to garner support for #MeToo Enabler Kevin Alexander (of or de) Leon. If true, Hernandez would join other ex and current Huizar Staffers (and the Central City Association CCA), who are seeking continuous employment and opportunities by fostering voter behavior that results in the incarnation of K.A. Leon as the temporary "Councilman Huizar 2.0 (pending a desired 2022 Mayoral Campaign) ** Candidate Cyndi Otteson correctly noted that fellow challenger Raquel Zamora (and Johnny Jay Jimenez) were not invited to the DTLA Strong Event due to not meeting Funding Limits ----Scott Johnson.
Red Spot in CD 14 at 1/14/2020 11:30:00 AM

All comments will be moderated before publication. Comments that are libelous, slanderous, untrue and/or overly obscene will be deleted and not published. Otherwise, have it and don't be stupid. You can comment anonymously if need be, but we prefer you man up and use your real name.